Fiddler crab, suggested by my good friend Tris. I've always loved these guys since I was a kid, definitely one of the most charming crab species out there. I really liked the colours on this one so I used that to choose a colour scheme. This one's a super quick Photoshop painting because I am having to prepare for a hurricane. 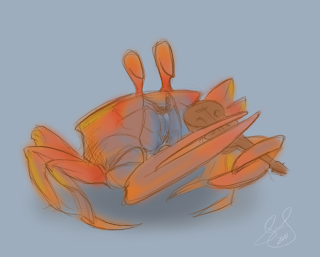 I'd love to draw more arthropods in the future, they've always intimidated me with their complex exoskeletons and I'd like to find a nice balance between realistic and cartoony for them. We'll see how that goes...
Posted by Shelley at 8/26/2011 2 comments:

super quickie because I'm busy this week, but I'm happy with how it turned out. I don't normally get this bold with bright colours! 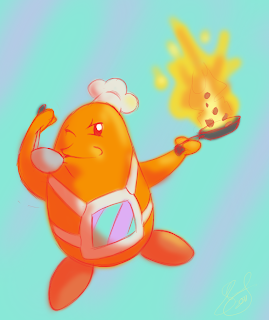 I was just going to be cheap this week and draw Kirby (for those who don't know - my favourite video game character of all time, and that is a big deal because I don't usually just have one favourite anything), but he's shown up in my blog/sketches so many times already it seemed pointless to use him for this project. I then figured I'd just draw a character from the Kirby series but I couldn't decide on whom. I like King Dedede and Meta Knight, of course, but wanted to pick someone that's less prominent in the franchise if I could. I like a lot of the enemy designs, but couldn't think of one that really stood out to me until I got to this guy!

I'm not really sure why I like Chef Kawasaki so much, honestly. He's an orange blob that can cook, great stuff. Oh, and when you eat him he gives you the power to destroy all enemies on screen by sucking them into a giant pot and cooking them up (sound familiar, Brawl fans?). That has to count for something.
Posted by Shelley at 8/22/2011 No comments:

have you ever seen a cephalopod fly?

Second entry in my Friday's Beast project, the aptly-named Dumbo Octopus, one of the most adorable molluscs in the world even by normal-people-that-don't-think-molluscs-are-cute standards: 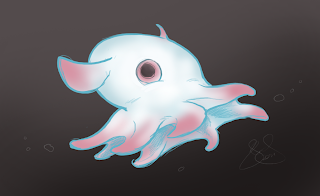 Those "ear" fins aren't just for decoration of course - they help the octopus move around in the water. I'm assuming they can change colour like most cephalopods, since the images I found of them varied hugely in colour. I really liked the colouring this guy and this guy had, so I went with that for inspiration. Check out this video of one and you can really see why they picked the name. Adorable!


Not much is known about these creatures, like most deep-sea animals, but I hope that will change in the future. Deep-sea creatures are awesomely weird and I'll definitely be drawing more in the weeks to come! 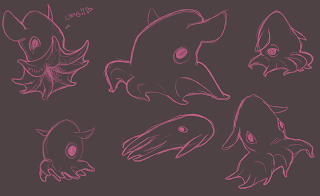 you don't scare me

I was hoping to finish this game before I drew this but since that probably won't be for a while: 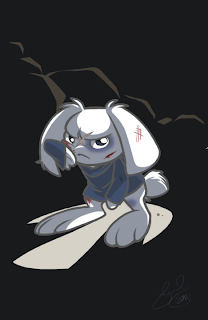 Here's little miss Sakamoto from Cave Story, who's already one of my favourites! I love how scrappy she comes across so I had to draw her all messed up but still ready for action. :D

If you don't know what Cave Story is, it's an indie 8-bit styled free-to-play platformer made completely by one man, Japanese developer and artist Pixel.. The designs are appealing, the story is really engaging, and it's just a lot of fun! I also think it's super cool that Pixel has kept it free to play online even though it's now out for download on the Wii, and soon to come to the 3DS (but I recommend playing it on the PC first and foremost, since Nintendo did change some things in their port and I'm always for experiencing something as the artist intended). If I've piqued your interest at all - and I hope I have - do check out the game here! I definitely recommend it.

I was trying to incorporate some background references to places in the game, but it wasn't working out so I went with my original simpler idea. Not the most interesting image in the world but I'm trying to make more complete images instead of just having a character on a blank background. Starting to get more into it, I think!
Posted by Shelley at 8/15/2011 2 comments:

Fridays are now Draw An Unfamiliar Animal day, and for my first outing I've picked the Silky Anteater. Love these guys: 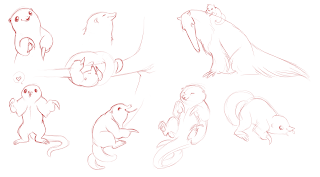 They hail from South America and are the world's smallest species of anteater - one can fit in your hand (so naturally I had to draw one with a Giant Anteater which is about the size of a large-ish dog, and also an Unfamiliar Animal so forgive its quick-n-dirty quality). They're nocturnal and arboreal (live in trees, you can tell by those feet and the prehensile tail and how tiny they are). They also supposedly camouflage themselves by living in silk-cotton trees and looking like the seedpods, because as their name suggests they're pretty fuzzy.

I love their little weird claw-hands! Here is a photo of one being cute (or not, depending on what you find cute. I find certain insects and baby Aliens cute over labrador puppies, so I'm willing to accept that my tastes might be a little weird). You can really see why one of their other names is 'two-toed anteater'.

I think my favourite drawings are the two on the bottom right corner, I think those capture the look of the animal best while still being a little stylized. I'm getting better at 'getting' an animal from references, though - the key thing for me is not to get too bogged down in details and try to get the shapes and proportions right first, as well as how the anatomy works - which is key for drawing different poses. Video reference would be the best thing for that, but that's hard to find for these guys since they're rarely seen as it is. :[

Anyway, I would very much like to finish a full image and make some better drawings of silky anteaters soon, but for now enjoy this quick sketchdump :)
Posted by Shelley at 8/13/2011 No comments:

What's up, internet! This week I've started a new personal project to get me to draw and post more, and I've designated Monday and Friday my special themed days for this (yes I know it's Tuesday, bear with me here. the hardest part of anything is getting started so better late than never x)).

Basically, every Monday I'll draw and put up a picture of one of my favourite fictional characters (well, ones I didn't create that is :B). Kicking off Monday's Character is Maya Fey from the Phoenix Wright games: 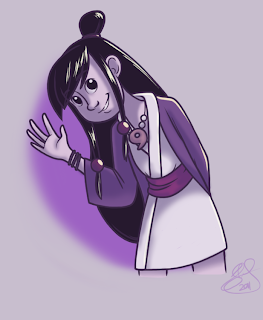 I like her because she's such a dork and likes food (both things that we have in common) and I like her design. She kind of annoyed me when I first 'met' her in the first Ace Attorney, but I've definitely warmed up to her since and it's weird whenever I have to solve a case without her. Her theme music is also lovely (♥), particularly when performed by an orchestra:


I do enjoy her and Phoenix's growing relationship (which I see as more sibling-type, btw, don't really buy the supposed romance... but then again I haven't played Apollo Justice yet, maybe I'll feel differently then. Also, please be a decent human being and don't spoil me). I love a lot of the characters from this series, so probably more will be upcoming on future Mondays.

Attempts at monochrome, hooray! This one's relatively 'normal' for me, but I'm hoping to get more experimental with these pictures in terms of colour, lighting, composition etc. which are things I'd like to play with more.

You guys can also feel free to suggest books/tv series/movies/games/comics etc. for me to draw from, and if it's something I haven't checked out yet I'd be happy to and see if I like anyone in it enough to draw them. What's in store for Fridays? Stay tuned... :B
Posted by Shelley at 8/09/2011 No comments: