The Bunny That Fell To Earth

Tribute art based on Naughty Rabbits, an iPhone game that I designed the characters for! 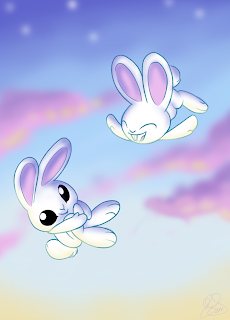 If you have an iPhone or iPad, check this one out. It's based around the myth of the rabbit in the moon from traditional Chinese folklore - apparently that rabbit's extended family is misbehaving and attempting to free-fall down to earth, and you have to help them get back home! I can't post any concept art I did for the game just yet, but once I get the green light I will probably do so here!

I've been trying to get back into drawing full backgrounds, I realized I haven't really finished a picture with a background since my thesis, and that's a little sad! I have a work in progress that I'm thinking about livestreaming sometime tomorrow... I'll post on my otherwise rather dusty Twitter account when the time comes.
Posted by Shelley at 11/30/2011 2 comments:

some days I am motivated to create nothing but tributes to my favourite things in the world. this was one of those days: 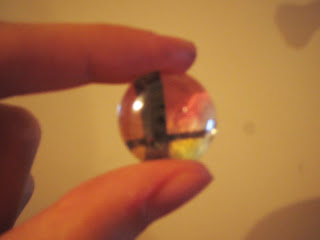 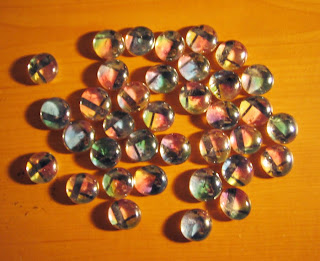 (someday I will have a more photogenic workspace. and/or a better camera.) 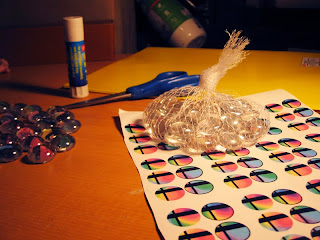 got the idea to make these smash balls a while back, the technique from a good friend that once gave me some gem-magnets as a birthday gift! I made this batch as an experiment that turned out surprisingly well, but I'm not really sure what I'm going to do with them all now. magnets, bracelets, hair accessories, paperweights, could sculpt some characters to hold them, I definitely want to make a necklace for myself from one - agh the possibilities!

until then, I'm glad that an art trade with my good friend Natasha Fishman has jerked me out of my art slump. I've been scribbling around producing nothing much I feel is worth showing, and it's possible I just needed to do some relatively meticulous Photoshop inking for a change of pace and concentrate on details which I don't do often. Natasha's character S'daza the spectrum demon is certainly good for giving me details to concentrate on. she's more than a little catlike in nature and that was what I drew on for the pose etc.: 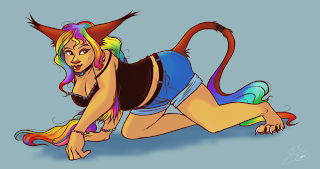 the inking was meticulous enough, but I got lazy with the shading as I am wont to do these days and messed around with layer styles instead of being proper about it. e_e;

on a lighter note, I recently received my Sketchbook Project sketchbook in the mail! the theme I chose is 'prehistoric', and I look forward to doodling plenty of awesome primitive fish, mammals, and dinosaurs in the weeks to come. :) I've opted for my sketchbook to be digitized, makes sense since the people I hold dear span at least two continents, but I might post any pages I'm particularly proud of here.
Posted by Shelley at 11/10/2011 No comments: